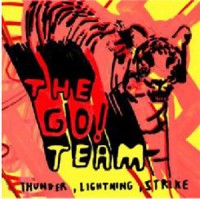 The Go! Team burst onto the scene back in 2004 with their debut album ‘Thunder, Lightning, Strike’, putting the disco in discordant and red limiting all the levels.

They scored Pitchfork Best New Music and a Mercury nomination and from a small bedroom concern in Brighton emerged to take on the world. Now lovingly restored to its original glory, ‘Thunder, Lightning, Strike’ is reissued on lavish silver vinyl.

Panther Dash
Ladyflash
Feelgood By Numbers
The Power Is On
Get It Together
We Just Won't Be Defeated
Junior Kickstart
Air Raid GTR
Bottle Rocket
Friendship Update
Hold Yr Terror Close
Huddle Formation
Everyone's A V.I.P. To Someone