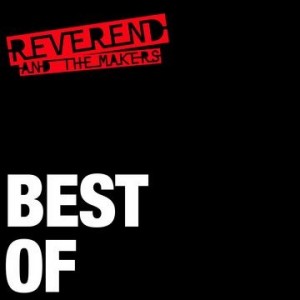 With six Top 20 albums under their belts, Reverend and the Makers release the ‘Best of Reverend & The Makers’ Sept 20th. The album spans the bands career so far and includes singles and fan favourites from their debut release ‘Heavy Weight Champion Of The World’ to their latest single ‘Black Flowers’. Rounding off both albums are two new songs, especially recorded for this compilation, ‘Elastic Fantastic’ (featuring Rich Westley from The Moonlandingz) described by The Reverend (Jon McClure) as “ a fantasy about killing Donald Trump with a bow & arrow” and ‘Te Quiero Pero.’ To coincide with the release there will be a full headline tour - watch this space. Jon says this about the track 'Te Quiero Pero. When we did this I was thinking about a town I once visited on the Rio de la plata in Uruguay called colonia . It’s a real Gaucho, South American cowboy town and still has the colonial architecture and stuff. I kind of wanted to make a song that sounded like that place looks. I envisaged myself riding through it on a horse. In my mind it’s from some mad Sergio Leone or Tarantino Mexican western although critics might say its more Antonio banderas’ zorro.'

Reverend And The MakersA French Kiss In The Chaos