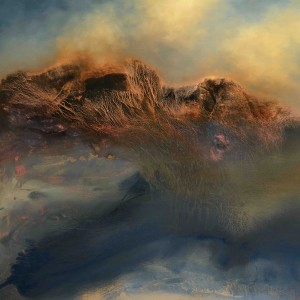 The Pyroclasts album is the result of a daily practice which was regularly performed each morning, or evening during the two week Life Metal sessions at Electrical Audio during July 2018, when all of the days musical participants would gather and work through a 12 minute improvised modal drone at the start and or end of the day’s work. The piece performed was timed with a stopwatch and tracked to two inch tape, it was an exercise and a chance to dig into a deep opening or closing of the days session in a deep musical way with all of the participants. To connect/reconnect, liberate the creative mind a bit and greet each other and the space through the practice of sound immersion. The players across the four pieces of Pyroclasts are Tim Midyett, T.O.S., Hildur Guðnadóttir, and as always Stephen O’Malley & Greg Anderson.

The music on Pyroclasts is inextricably woven to Life Metal. It exists on the very same tape reels, was explicitly recorded by Steve Albini. The brightness and vividity of that glorious session glares through these four tracks, the precision and radiance, prismatic lustrousness of the saturation, the elemental sculptural shapes, the abstract renderings. It is a sister, or perhaps a shadow album. Or perhaps the now apparent miasma or aether. But it also exists in a form of a pause, a time space which exist in between and around the compositional structures of Sunn O)))’s titanic works.

For the listener or recipient/participant there are deep rewards within the patience of pulling down the walls and letting the music feel, and feel the music. To be immersed will reveal great detail and colour, clarify image, encourage a depth of focus and stillness which may lead to a quite profound experience. Sitting inside the space of time. A deep form of elementalism, even atomism, and connection with presence moment, time and reality.

Sunn O))) would invite their audience to consider these points of perception when experiencing and listening to Pyroclasts. Sunn O))) would also invite and encourage the audience to use Pyroclasts as a lens to review and reexperience the complexity of the Life Metal album, and even to interrupt its sequence with Pyroclasts. This elaboration can bring the astute listener both abyssal, hallowed rewards.

Pyroclasts was recorded and mixed by Steve Albini at Electrical Audio on two inch tape July 2018, and mastered by Matt Colton through all analogue AAA process at Metropolis July 2019.

Stephen & Greg would like to dedicate this album to the memories of Ron Guardipee, Kerstin Daley & Scott Walker.

Barry says: There's nothing that Sunn can't do as far as i'm concerned. Though their music takes a little while to acclimatise to (like being in the middle of a blizzard or walking a tightrope during an earthquake might), but once it clicks, there's nothing more primal and satisfying than a nice drone. Pyroclasts is every bit the Life Metal sidekick, just as powerful but with different abilities. Mindblowing stuff.

SIDE B:
Ampliphædies (E)
Ascension (A)