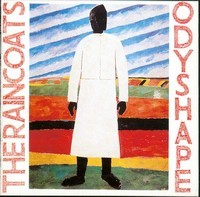 "Odyshape" the second album by The Raincoats originally released on Rough Trade Records in 1981.Re-mastered from original masters. It was The Raincoats I related to most. They seemed like ordinary people playing extraordinary music. Music that was natural that made room for cohesion of personalities. They had enough confidence to be vulnerable and to be themselves without having to take on the mantle of male rock/punk rock aggression…or the typical female as sex symbol avec irony or sensationalism. (Kim Gordon, Sonic Youth,1993). // We just really loved what The Raincoats were doing - they were a really exciting band. I think the thing that was good about The Raincoats simply was that the tradition that they were playing in was their own and so they had an original voice. You couldn’t ignore them - they were undeniably fascinating - the interplay between the two voices and the sound of the group was something original and that was what was exciting about them.