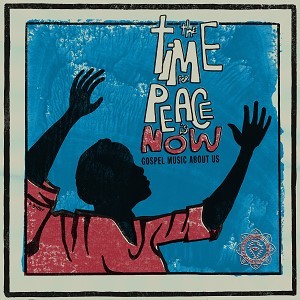 The Time For Peace Is Now compiles fourteen songs that, while recorded over four decades ago, speak now more than ever.

The tracks are a subset of 1970s-era gospel, not directly talking about Jesus or God, but instead tackling how we live with ourselves and each other.

These are undeniably soulful, passionate, and urgent songs from obscure 45s, dug up from a long dormancy in attics, sheds and rated across the American south. Compiled by Gospel guru Greg Belson.

“The Gospel bands heard on The Time For Peace Is Now were comprised of musicians who played both church and secular music. The church borrowed—or rather commandeered—the guitar, bass, drums, and other instruments used to backup Motown, Stax, and other popular labels—to give power to the songs they supported. Musicians who sang at ‘the club’ on Saturday night were often leading solos or singing in the choir on Sunday mornings. Saturday night and Sunday morning music began to interweave, which was especially felt when the church choirs sang Gospel. It was Gospel’s influence that made Aretha Franklin, Sam Cooke, and many others the voice of the 1960s and 1970s. Gospel was the soul of America. This album is reflective of the dichotomy of the sacred and the secular. The music here is in some sense the same as the music of the club. “Keep Your Faith To The Sky” could have you singing “Keep Your Head To The Sky” by Earth, Wind and Fire. Listening to “It’s Hard To Live In This Old World” and “That’s A Sign Of The Times” imbues the pessimistic/realistic sense of what was happening. Like many Blues songs, the problem must first be named before it can be solved. At the end of The Time For Peace Is Now, hope is still present. The problem is named in the beginning and a possible solution is presented. -Pastor Keith L. Whitney

Patrick says: Luaka Bop's latest compilation lifts the lid on the peculiar 70s fusion of funk, soul and gospel, with a singular focus on the songs about us - not Him. If you're hankering for some humanist grooves, look no further.

A1. Time For Peace - The Little Shadows
A2. It’s Hard To Live In This Old World - Rev. Harvey Gates
A3. That’s A Sign Of The Times - The Floyd Family Singers
A4. Keep Your Faith To The Sky - Willie Scott & The Birmingham Spirituals
A5. We We Are In Need - James Bynum
A6. Condition The World Is In - The Religious Souls
B1. We Don’t Love Enough - The Triumphs
B2. Peace In The Land - The Gospel I.Q.’s
B3. I’m Trying To Be Your Friend - The Soul Stirrers
B4. We Got A Race To Run - Staples Jr. Singers
B5. Let Your Light Shine - Willie Dale
B6. Price Of Love - Rev. Harvey Gates
B7. Sunshine After Every Rain - The Mighty Reverlaires
B8. Don’t Give Up - The William Singers