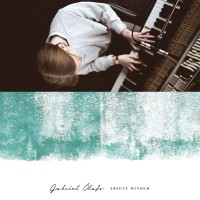 “I love old movies and stories. I enjoy the fact that film scores demand a piece of music to have emotional depth. It has to convey multiple emotions and therefore has its part in telling a story.” Gabriel Olafs possesses an exceptional talent for telling a stirring symphonic story through instrumental music. At just 19, the composer and pianist wowed viewers and a live audience on Icelandic TV during his first ever live performance, where he was discovered by Björk’s manager Derek Birkett, announcing a record deal with One Little Indian Records shortly after.

“My favourite thing is to compose a ‘theme’ for somebody – a character or even a place. A memorable melody that instantly takes you somewhere else” the young musician elucidates. At just 14 years old he wrote ‘Absent Minded’ – an imagined theme tune and subsequent lead single from his forthcoming debut album of the same name. “I am very visually-minded, and I often compose to an imaginary story or character. You could say my album is a score to a non-existent film.”