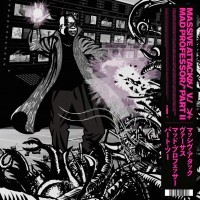 All 8 of the Mad Professor remixes included here are previously unreleased and include his dub mixes of 2 tracks not originally featured on "Mezzanine" but from the same period: "Metal Banshee" - a dub version of "Superpredators" which was a cover of Siouxie and the Banshee’s "Metal Postcard"; and Wire, a track they recorded for the soundtrack of the film Welcome to Sarajevo.

This release is a vinyl accompaniment to the 2CD deluxe version of "Mezzanine" which features these remixes + the original album remastered.

Sonically it doesn't pull any punches, with Mad Prof's iconic, dub-wise production decorating and galvanizing the original stems with a futurist / psychedelic mentality. Striding confidently into avant-dub territory, you can really get lost in these deep layers of bass & echo.

Matt says: Trippy n fathoms deep dub here (just the way I like it) from Mad Prof, who gets his ganga-smothered paws on the Massive Attack stems.