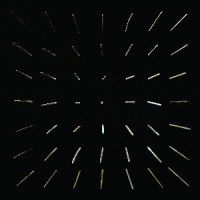 Clipping return with "There Existed an Addiction to Blood", the group’s fourth effort and the follow up to "Splendor and Misery", the album features the singles "Nothing Is Safe", "Blood of the Fang", "La Mala Ordina" (Feat. Benny The Butcher, ElCamino, The Rita), and was produced by Clipping, mixed by Steve Kaplan, and mastered by Dave Cooley at Elysium Masters in Los Angeles. The album also features appearances from Ed Balloon, La Chat, Counterfeit Madison, and Pedestrian Deposit.

"There Existed an Addiction to Blood" finds Clipping interpreting another rap splinter sect through their singular lens. This is Clipping’s transmutation of horrorcore, a purposefully absurdist and creatively significant sub-genre that flourished in the mid-90s. If some of its most notable pioneers included Brotha Lynch Hung and Gravediggaz, it also encompasses seminal works from the Geto Boys, Bone Thugs-N-Harmony, and the near-entirety of classic Memphis cassette tape rap.

The most subversive and experimental rap has often presented itself as an alternative to conventional sounds, but Clipping respectfully warp them into new constellations. "There Existed an Addiction to Blood" absorbs the hyper-violent horror tropes of the Murder Dog era, but re-imagines them in a new light: still darkly-tinted and somber, but in a weirder and more vivid hue. If traditional horrorcore was akin to Blacula, the hugely popular blaxploitation flick from the early 70s, Clipping’s latest is analogous to Ganja & Hess, the blood-sipping 1973 cult classic regarded as an unsung landmark of black independent cinema, whose score by Sam Waymon, the band samples on "Blood of the Fang" and inspired the album’s title.