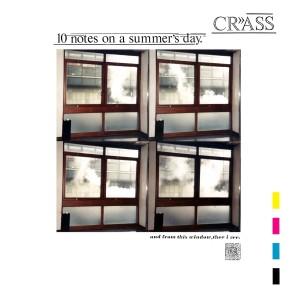 Ten Notes on a Summer's Day was Crass's final album under the Crass name. It was released in 1986 and consists of a vocal and instrumental version of the same tracks in an avant-garde musical style.

Recorded at Southern Studios in the Winter of 1984 / Summer 1985. Penny Rimbaud says in the liner notes: “Just as throughout our seven years’ existence as a punk band we had made concerted efforts to avoid specific political pigeonholing (‘left-wing, right-wing, you can stuff the lot’), so, musically, we attempted to push the barriers, always avoiding the obvious.”

In one respect alone we were absolutely consistent; our inconsistency. If the essentially rowdy Feeding of the Five Thousand and Stations Of The Crass had established us as the thinking man’s bovver band, so Penis Envy broke the mould as an almost lyrical, yet still very angry piece of rock’n’roll feminism. And just as at the very time that the BBC thought us safe enough to be given airplay, so we ploughed in with Christ, The Album, an uncompromisingly avantgarde noise album which in its own way went a long way in redefining rock’n’roll’s limited parameters.

Then, in much the same way as our fifth album, Yes Sir, I Will, owed more to free jazz than to rock, so Ten Notes On A Summer’s Day nudged itself towards modern European atonality, and us completely out of the rock’n’roll arena (as testified to by dramatically reduced record sales). In this sense, Ten Notes On A Summer’s Day truly was a swansong.”

The vinyl edition comes in a single sleeve with printed inner – bag/insert. The CD comes in cardboard digipack type packaging.

Side B:
1. Where Next Columbus? (Instrumental Mix)