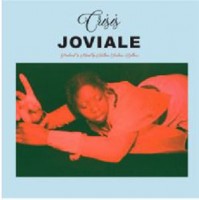 “I like to be quite plain and direct with my lyrics. I definitely try to make sure every song has its own personality, has its own world, its own universe,” says 24-year-old born and raised Londoner Joviale. Having “always been a creative person,” she decided to take the leap into making music three years ago following a transformative period in her life; the kind you go through in your early 20s when chapters of your life close and new ones begin. She taught herself to play the guitar, began to upload demos to Soundcloud and two years later decided she was ready to play her first show - a gig at Bermondsey’s DIY Space which she set up, paid for and organised all on her own. It put her on the map immediately and she found herself navigating meetings with major label executives while working 40 hours a week at her waitressing job.

Joviale’s music paints landscapes and worlds: lovers on sinking boats, birds of paradise, the whispering and wailing of sirens luring people towards danger. On her ‘Crisis’ EP, produced by Bullion (Laura Groves, Westerman, Sampha) and being released on Blue Flowers (Nilufer Yanya, Westerman, Puma Blue), she uses her unique talent for musical storytelling to address and soothe the myriad crises - “identity crisis, personal crisis, financial crisis” - that life in your 20s seems to consist of.

Opening track ‘Struggle Cuddle’ is inspired by the duality of the sea, with anxious synths adding an element of tenseness to the playful, nursery rhyme-like rhythm. ‘Ride Away’ deals with the “excitement and discomfort of risk-taking,” while ‘Dream Boat’ was birthed from a space between a lucid dream and a movie watched in bed and sees Joviale meditating on what happens when a smooth-sailing relationship drifts off course and has to navigate choppier waters. Final track ‘Taste Of The Heavens’ is the exhale and the release at the end of the journey.

Having spent the last year honing her sound on London’s live circuit - including a successful residency at Laylow and a stint experimenting with an 8-piece band - her debut EP sees Joviale using her natural gift for storytelling to create dreamy, silkwrapped universes emotionally inspired as much by the bittersweet sound of 60s girls bands such as The Shangri-Las - “I feel like there’s a lot more pain hiding under that sugary-ness” - as musicals, which she loves for their ability to create narratives that can sweep the listener away. Jeff Buckley, Billie Holiday and Grizzly Bear were all also favourites growing up but more than anything Joviale is inspired by the concept of sound itself; its power and ability to psychologically affect people, both within music and the wider world. “I get very obsessed with soundscapes: different types of sounds, different types of source of sound. As much as I can be influenced through music, I think I’m also very inspired by the actual creation of sound. The vibration. The effect of air itself.”

As such, ‘Crisis’ is a spirited, sugary remedy to the sensory overload that can define both life in a big city and the fraught journey of making it through your 20s. With her ability to mine a plethora of different creative mediums, Joviale turns a crisis into a gift. “I feel like you learn so much more by allowing someone’s imagination to be challenged,” Joviale says of her elaborate musical paintings and richly constructed dreamworlds. “I love to be challenged, and I love to challenge.”

Struggle Cuddle
Ride Away
Dreamboat
Taste Of The Heavens