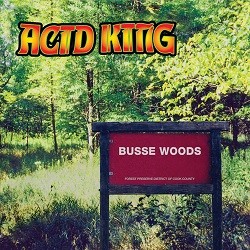 Every small town encompasses that one long stretch of forest where kids run to get high, jam out, and just escape. For San Francisco-based stoner metal trio, Acid King vocalist, guitarist, frontwoman, and mastermind Lori Woods, Busse Woods offered such a retreat in her native Illinois as a teenager in the ’70s. This 3,700-acre section of the Cook County Forest Preserve system beckoned her during high school with its buffet of dope, frisbee challenges, and Black Sabbath blaring from numerous trunks well past sundown. Those days left such an imprint on Lori she titled Acid King’s second full-length released in 1999 Busse Woods. Celebrating its 20th year with a special reissue on Riding Easy Records and tour in 2019, it represents the heart and soul of the band.The album still exudes the same sense of mysticism it did upon release in 1999. As the story goes, Lori and bandmates Joey Osbourne(drums) and Brian Hill (bass) entered a practice space to write the full-length follow-up to their debut Down With The Crown.

Organically, they jammed out five originals and a take on “39 Lashes” from Andrew Lloyd Webber’s Jesus Christ Superstar.As everything gelled, they recorded with legendary engineer Billy Anderson. Prominent Bay Area artist Frank Kozik initially released the CD on his Man’s Ruin record label. Then “everything fell apart.” Behind the scenes, personal and professional relationships crumbled. Marriages ended. Lineups shifted. In the face of such tumult, the music of Busse Woods rarely got its due on stage in the aftermath, even though the aesthetic would prove influential.In the middle of various reissues and re-releases, Acid King kept touring internationally throughout Europe and Japan from 2005-2015.

In between this time they jammed on riffs and started to craft songs but ultimately didn’t kick it into high gear to finish the release until 2015. They reawakened in the studio with the 2015 opus, Middle Of Nowhere, Center Of Everywhere. While the new music caught critical acclaim and fan approval, a funny thing happened, and Busse Woodsalso came back to life. Its songs would generate the most streams on Spotify. They’d generate loud responses in concert and became their most critically acclaimed release to date. The stars aligned. Twenty years down the line, it felt only right for Lori and Co. to revisit this landmark and give it the proper tour it deserves.