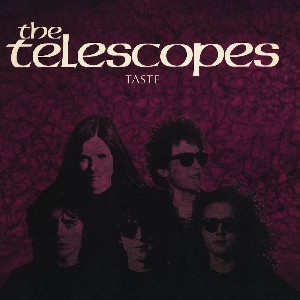 Every so often, an album appears from out of nowhere that will create a devastating impact on the future. One of those records was ‘Taste’, the 1989 debut album from The Telescopes now set to be reissued by London-label Fuzz Club to celebrate its thirtieth anniversary. Hailing from Burton-On-Trent, an industrial UK town in the heart of the Midlands, if you were a regular gig-goer from that part of the world around that time you’ll have already seen this five-piece share stages with the likes of Primal Scream and My Bloody Valentine or, if not, touring around the UK with Spacemen 3 and The Jesus & Mary Chain. The Telescopes’ live shows were often a memorably ferocious affair; the primal scream of vocalist and founder Stephen Lawrie cutting through unsuspecting audiences like butter through a knife, aided and abetted by the two-guitar assault and taut rhythm section of his band. Following their fast-rising notorious live reputation and the release of three singles (the first of which being a split flexi-disc with Loop), The Telescopes released their debut album, Taste, in 1989 on the now defunct What Goes On label. It was an unrefined bolt out of the blue.

A sonic feast capable of transforming from visceral to tranquil in a matter of seconds. Even now, listening to blissful opener ‘And Let Me Drift Away’ as it melts into the brutal ‘I Fall, She Screams’ sends shivers up the spine. There’s little respite for the rest of side one, ‘Oil Seed Rape’ thuds and groans, then ‘Violence’ follows suit. All scratchy guitars that sound as if they were designed primarily to bludgeon senses. ‘Threadbare’ then ‘The Perfect Needle’ – the only single taken off the album – bringing the first half to an uneasy close. The second side kicks off with ‘There Is No Floor’, an ode to Roky Eriksson via My Bloody Valentine’s ‘Feed Me With Your Kiss’ that ultimately merits its mention alongside both.

‘Anticipating Nowhere’ is the sound of punk rock had it not jumped on the nostalgia gravy train instead, while the sinister ‘Please, Before You Go’ finds both Lawrie and Doran at their vocally harmonious finest. ‘Suffocation’ captures the ferocious demeanour of their live show while ‘Silent Water’ tells its own desolate tale of being buried at sea as a halo of pedal infused noise engulfs Lawrie’s vocals forthwith. Culminating in ‘Suicide’, the traditional ending to their live set at this juncture, its continuous loop only bringing the song to a conclusion at the listener’s command. Three decades have passed since its release yet ‘Taste’ still sounds like nothing else created before or after. The list of musicians who’ve cited its influence is endless and no doubt will be for years to come. The Fuzz Club reissue is due for release September 13th and comes on coloured vinyl with a booklet of photos from the era and new liner notes reflecting on the album's legacy.

A1 And Let Me Drift Away
A2 I Fall, She Screams
A3 Oil Seed Rape
A4 Violence
A5 Threadbare
A6 The Perfect Needle

B1 There Is No Floor
B2 Anticipating Nowhere
B3 Please, Before You Go
B4 Suffercation
B5 Silent Water
B6 Suicide

The TelescopesSplashdown The Complete Recordings 1990-1992