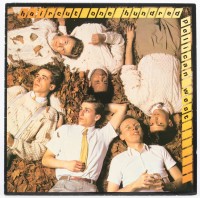 Fun but clever ’80s New Wave pop act Haircut One Hundred scored a gigantic hit with their 1982 single “Love Plus One”. It was featured on their successful debut album Pelican West, peaking at 2 in the UK Album Chart and 31 in the Billboard 200. The pop rock record showcases their refreshing music with Conga and Brazilian percussion and woodwind and brass instruments. It contains a couple of outstanding tracks which defined the music of the New Wave acts. Feel good music as it should be