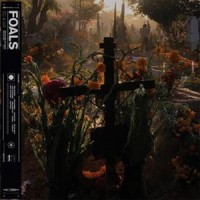 Foals’ creative ambition for ‘Everything Not Saved Will Be Lost – Part 1’ resulted in a striking state-of-the-world-address of an album in which apocalyptic lyrical themes were equalled by the sheer impact of the music.

Now Foals complete that artistic statement with the release of ‘Everything Not Saved Will Be Lost – Part 2’.

“Part two is a heavier listen, the guitars are more emphasised and there’s some big riffs on it,” explained Philippakis in an interview with NME. “It’s a rock record and it definitely carries on the narrative from part one. Part one ended with a lot of fire and destructive imagery, part two is trying to respond to that: how you can continue in the wreckage and through the scorched earth? We’re just excited for people to hear it because it completes the journey of what we’ve made over the last year-and-a-half.”

Whereas ‘Part 1’ melded Foals’ disparate influences into a thrilling melting pot of sounds, much of ‘Part 2’ simmers with pure visceral intensity. ‘The Runner’ and ‘Black Bull’ are streamlined attacks, with vehement rhythmic onslaughts the foundation for even bigger riffs. It’s an approach that also informs ‘10,000 Feet’, as it lurches ominously from dreamy soundscapes into a heavyweight collision of post-punk and psychedelia.

Yet ‘Part 2’ also echoes the opening chapter’s eclectic nature. The cinematic instrumentals ‘Red Desert’ and ‘Ikaria’ underline that ‘Everything Not Saved Will Be Lost’ is a journey rather than a mere collection of songs, while ‘Wash Off’ marries manic world music-tinged grooves with a punk-like intensity.

Barry says: The foals return with the second part of their superb 'Everything Not Saved Will Be Lost..' series, and this one's possibly even better than the first. Smooth synths, soaring melodies and percussive, nigh-dancefloor arm-wavers. Classic foals +.