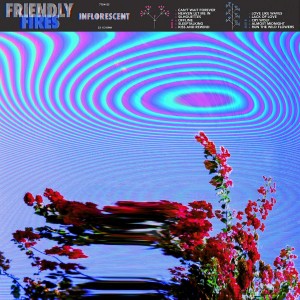 Brand new album from the band that brought you "Paris" and Indie Anthem "Jump In The Pool" Arriving eight years after their last album, Inflorescent is the sound of a band rejuvenated and reborn. The hiatus had left some to question whether we'd ever see another full length Friendly Fires record but once the three band members - Ed Macfarlane, Edd Gibson and Jack Savidge, friends since the age of eleven - reconvened in Macfarlane's parents' St Albans garage (the scene of much of their early recorded output) at the tail end of 2017, things were never really in doubt. Arriving with just three scrawled words ("Love. Like. Waves") as a starting point, they soon emerged with a finished song as fresh and vital as anything they'd done before.

Barry says: A great return for the Friendly Fires, from the grooving guitars and falsetto vocal swathes to more downbeat, synthy affars, 'Inflorescent' is a bracing and confident ode to dance from the ever-reliable trio.