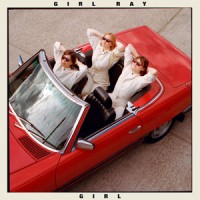 Girl is the second album from the North London band Girl Ray. Recorded at Electric Beach Studios in Margate with Ash Workman (Christine and the Queens, Metronomy), the album is a delightful, sun-kissed tribute to their love of pop and R&B.

It was Ariana Grande’s explosion into pop culture that kickstarted a new era for Girl Ray, as well as the realisation that their most-listened-to Spotify playlists contained pure pop music. When Poppy began experimenting with writing songs on a computer using keyboards, a collection of shimmering, foot-tapping, sparkling pop bangers poured out. With this new set of songs, Girl Ray have been brave enough to completely change their sound rather than play it safe, yet still remain unmistakably themselves - it’s Girl Ray, but with added synths.

If their debut, Earl Grey, was a hot cup of tea and a cuddle on the sofa, Girl is being in a cab with the windows down on the way to a beach bar for sundowners. It’s the excitement of Rihanna’s If It’s Lovin’ That You Want, combined with the eye-rolling, impenetrable sardonic humour of a girl gang. Among the grin-inducing, trepidatious and intensely courageous R&B-style tracks on the album, are also beautifully composed piano ballads steeped in the sadness and unrequited love that made Earl Grey feel like a knowing look from an old friend.

Girl is expertly-crafted pop, created by dedicated artists on a mission to make music for people to really enjoy. Music that doesn’t look to confuse or patronise. Music to fall in love to, to dance to. Songs you’d want to send to your friends. They have used the universal, happy medium of pop music to put across joyous, accessible messages of love, friendship and life to the world, like some of the best songwriters before them.

Andy says: We loved last year's debut album here at Piccadilly, as it reminded the oldies amongst us of those halcyon DIY mid-80s indie pop days, and the youngsters just felt like they could be in the band! For the follow up they've swapped guitars for synths and made a sweet pop record that's way more sophisticated, but still manages to display all the quirks and charm which made us fall in love with them in the first place.