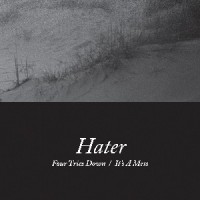 “Swoony Swedish indie-pop.” Record Collector. Two new tracks from Malmo’s much-praised Hater. “One of the best bands in the world” Gorilla Vs Bear. Hot on the heels of last year’s ‘Siesta’, their second studio album and first for Fire Records. It’s a compelling slice of angular pop music; dysfunctional, dreamy, tempting, and teasing. ‘Four Tries Down’ presents an acute hand-tooled angular rasp, with its chiming guitar chopped out against a disengaged rhythm, topped with the dreamy ambience of Caroline Landahl’s whispered confessional that cuts through the mesmerising hum. ‘It’s A Mess’ is more subtle, with a teenage Nico admitting to inevitable boyfriend trouble. Drums rattle before cutting down to the basics to let Landahls pontificate as it all goes wrong – it’s a beautiful mess. Beautiful. “Nostalgic for ‘90s indie pop innocence.” MOJO Set for release this Autumn, 7" 'Four Tries Down' coincides with Hater’s first US tour. “Too noisy to be indie pop, too sweet to be post punk.” Clash.