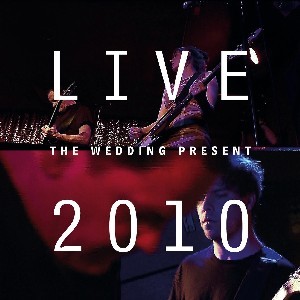 The Wedding Present, recorded and filmed at the Atomic Café, Munich, on 24 October 2010. This double disc release includes both a CD and a DVD of the concert. Of the original Bizarro release, Allmusic says: The Wedding Present's second proper studio album, Bizarro, cut down a bit on the frenetic jangle the band was known for in its early days and replaced it with healthy doses of darkness and power. Adding some fuzzy, crunchy distortion to give the guitars some hefty impact, slowing the tempos down to speeds that allow vocalist David Gedge to squeeze more heartbroken despair and bleak sarcasm out of every line, and generally upping their game in every way, the album was the fullest realization of The Wedding Present's sound yet. Leading off with the unstoppably hooky ‘Brassneck’ which features a brilliant Gedge reading of lines that rhyme "grow up" and "throw up," the album plays like a collection of thematically related singles.

The most single-y among them is ‘Kennedy’ which has some brilliant sing-along lyrics and an intensely dramatic guitar strum buildup that crescendos into a maelstrom of sound. The rest of the record isn't far behind; whether it's the sparse ‘What Have I Said Now?’ or the slowly grinding ‘Bewitched’ one could extract any song and it would feel like a highlight - even the epic-length ‘Take Me!’ which closes the album in a fury of strums, drum fills, and chugging bass that builds and builds until it seems like the song is going to levitate and take the listener right along with it. The Wedding Present didn't necessarily need to improve their already winning template, but they did and it pays off big time on Bizarro