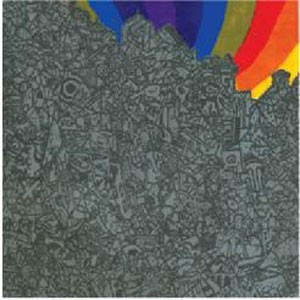 Legendary band Lightning Bolt’s ‘Wonderful Rainbow’ is one of the most quintessential albums to come from the underground in the last 20 years. Included in lists like Pitchfork’s 200 Top Albums Of The 2000s and the book 1001 Albums You Must Hear Before You Die, Lightning Bolt’s seminal record solidified their place as pillars of the underground community.

‘Wonderful Rainbow’ saw the duo of Brian Chippendale (drums/vocals) and Brian Gibson (bass) being compared to the likes of Slayer, Ornette Coleman and early Boredoms and captured the bristling, immeasurable energy of their mythical live shows, which continue to astonish audiences today.

Brian Chippendale releases music on Thrill Jockey with his solo project Black Pus, has collaborated with Björk, Boredoms, Andrew W.K. and Lee ‘Scratch’ Perry and has published several books of his art through Drawn & Quarterly and Picturebox.

In 2017, Brian Gibson developed the video game ‘Thumper’ with his own company, Drool.

‘Wonderful Rainbow’ is released for the first time ever with the full artwork as initially conceived by Lightning Bolt in 2003. Front and back artwork familiar to fans is still there but now in a full wrap, only previously available in the very early screenprinted version. This wrap has full-colour artwork on the inside, originally only available as a small insert. The LP jacket itself is never before released artwork created at the time of the album. All artwork has been created by Brian Chippendale.