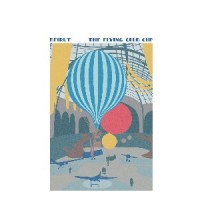 Following 2006's astonishing debut "Gulag Orkestar", Zach Condon AKA Beirut returned in 2007 with "Flying Club Cup". In between the two albums, he had been living in Paris immersing himself in France's culture, fashion, history and music, in much the same way as he absorbed Balkan culture for his debut album. Condon's musical gaze now looked to the likes of Jacques Brel and Francois Hardy for inspiration, and "Flying Club Cup" is another sweeping and triumphant European folk album that combines these new ideas with elements of his previous work too. Where as "Gulag Orkestar" was mainly a solo effort, for this album Condon acted as a band leader putting together a core group of eight musicians and together they've managed to recreate his cultural borderless vision with this expansive and enthralling album.