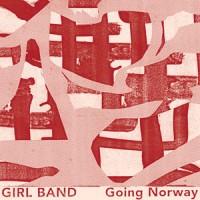 Going Norway is Girl Band’s second single following their 4-year hiatus, a two track 7” with an exclusive B side taking the same name as their upcoming album ‘The Talkies’.

In Going Norway, we hear the mimicry of Dara’s vocal to Alan’s guitar coming close to a moan, both simultaneously reaching outside of the confines of Adam’s steady, flitting snare sound: ‘And Why/ Is the Death/ So Alive?’ The track pushes and pulls against itself, and the emotion is felt within this combative movement and the elongation of vowels – the intensive repetition to the point of abstraction results in a violent discrepancy between language and meaning, as Dara draws attention instead to the way the mouth moves and how sound is formed.

A – Going Norway
B – The Talkies