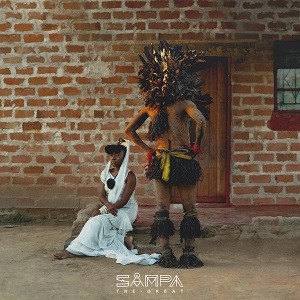 Sampa The Great creates a sense of home on her debut album - “The Return”. A characterful record, its reference points range from classic hip-hop to ancient Southern African sounds. Built on four years of personal and musical soul-searching, it’s an assured statement, the product of meaningful musical connections and of Sampa having to redefine her self-identity away from the comforts of family and old friends.

Building on her formative works, “The Return” sees Sampa tackle bigger questions, exploring what it means to feel at home, to feel excluded, and to see someone as an outsider. It stems from the rift Sampa has experienced in the rise of her career, where she’s celebrated as part of a new generation of Australian musicians while at the same time still being seen as an other. The album artwork features Sampa alongside a Nyau dancer - traditional dancers and figures that are found in villages across parts of Africa. For Sampa, the dancer represents the fear of the unknown which is often projected by the West when it comes to African traditions. She also wanted to rediscover her ancestors’ spirituality: her mother’s side of the family are of the Bantu ethnicity from which the Nyau tradition originates.

The themes behind the album are addressed head on in title track ‘The Return’. At the close of the track, Whosane’s lyrics refer to “returning to the self of my self”. This, for Sampa, is what she’s been trying to do for the past six years: to find new ways of feeling at home and rediscover an emboldened idea of herself. "Home is described in a lot of ways and means a lot of different things to different people,” she says. “I had to redefine in my mind and in my spirit what home means.” The album is both a re-telling of that journey, and the realisation of her aim; the album walks us through that return to home, while the accomplished sound and lyricism underscores the steps she’s made as a person and artist.

Her African heritage is an important aspect of her exploration of home. On ‘OMG’, for instance, she talks about celebrating the cultures and traditions of Africa:

Explaining the meaning behind the lyrics, she says, “I personally feel that people on the continent have a duty to our family in the diaspora, to re-teach our culture, language, spirituality, ways and return our peeps to ourselves. To me ‘OMG’ sounds like the songs we heard in our childhood. It’s broadly about flexing your culture! Loving where you’re from and even being shocked at the realisation of not knowing how dope it is to be ‘who you are’.” The video was shot between South Africa and Botswana, where she was raised, and gave Sampa the chance to involve her parents in her world. “I got to do something that I’ve never done before,” she says. “Which is to have my parents in one of my music videos. This is the first time they have been involved in my music at this level and it was important for me to express accepting and flexing my culture with the two people who know me most!”

On album opener, ‘Mwana’, she employs the language of the Bemba tribe which her mother is a descendent of. “Mwana” means “child” in Bemba, and the song samples her mother and features her sister singing, making connections between her immediate family and their wider history. However, “The Return” is a reference to a physical journey, as well as a spiritual one; Sampa returned to Zambia and Botswana, where she was born and raised, respectively. There, she recorded the videos for both ‘Final Form’ - the triumphant single which sees her embrace the struggle of growing as an artist, and ‘OMG’. She is also set to release a short film titled ‘Homecoming’ about her experiences returning home to play her first shows on African soil. Across every aspect of “The Return”, from the music and the lyrics, to the visuals and the artwork, Sampa The Great returns to the foundations propping up her sense of self and in doing so makes a bold statement about who she is as an artist.

Millie says: Sampa The Great’s masterful ‘The Return’ is the musical culmination of four years of self discovery, a theme which runs throughout the entire album. Incorporating everything we love about hip-hop as well as a celebration of Southern African rhythm, this album is pure and dynamic. Featuring some badass artists like Whosane and Krown, this is the gift that just keeps on giving.