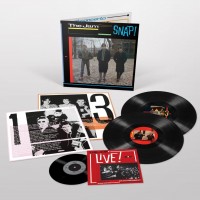 Originally released in 1983, Snap! was the first ‘greatest hits’ collection from The Jam and appeared just after Paul Weller took the shock decision to split up the band at the height of their popularity and success.

The title Snap! originates from the production, the A&R team and the band in the studio listening back to recording sessions and deciding if the track had the necessary distinctive Jam ‘snap’ sound to make the cut…!!

The original 29-track album with chronological sequencing clearly illustrates their brief but stunning story, from explosive debut on the embryonic English punk scene and their meteoric rise to become one of the greatest and best-loved British bands.

From their thrilling debut single – In The City to their farewell – Beat Surrender the collection features 16 top-30 singles – 4 number ones!

Features hit singles – Down In The Tube Station At Midnight, Strange Town, When You’re Young, Going Underground, That’s Entertainment, Start!, Town Called Malice , The Eton Rifles and many more. Also includes remarkable B-side tracks such as The Butterfly Collector and Tales from the Riverbank.

“One of the greatest ‘greatest-hits’ albums of all time”.

LP2 - Side B
1. Absolute Beginners
2. Tales From The Riverbank
3. Town Called Malice
4. Precious
5. The Bitterest Pill (I Ever Had To Swallow)
6. Beat Surrender