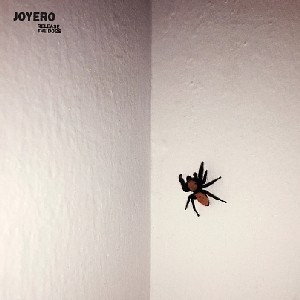 Andy Stack has rightfully earned a reputation as a generous collaborator and musical polymath, both as half of the beloved duo Wye Oak and on the road and in the studio with Lambchop, Helado Negro, and EL VY. As a multiinstrumentalist and producer, Andy has an uncanny ability to construct the precise musical architecture to frame and support unique and compelling voices. With his debut solo record as Joyero, Andy puts his own voice front and center. Written and recorded primarily in Marfa, Texas, during a transitional moment between records, cities, and relationships, Release the Dogs occupies its own liminal space between the natural and the man-made, between the structures we create to keep ourselves safe and the terrifying enormity that exists beyond them. Throughout the record, organic and electronic elements are seamlessly woven together into a single fabric that can be both intimate and explosive. The fingerpicked guitars of “After You” appear no more or less “real” than the processed drum machine beats on album opener “Alight,” just as the tarantula on the album’s cover appears no more or less “real” than the white wall on which it sits.

The magic of the image, and the magic of the record, is in the way they are framed together. As with Wye Oak’s best records, Release the Dogs finds its own unique voice by holding opposing ideas and aesthetics in tension with each other, and inviting the listener to find their own answer. That tension comes through loud and clear in Andy’s voice, which is recorded so intimately that it sometimes sounds like it’s emanating from inside your own throat. “While you’re away, I wait outside the house / Lift an ear to every sound / I sleep all day like a dog whose master’s out,” he sings on “Dogs,” painting a vivid picture of the album’s titular animals as a symbol of both domestic stasis and what often lurks beneath it. Throughout Release the Dogs, the habits and rituals of domestic life begin to crack and fray under the questions we are afraid to ask and the truths we are afraid to acknowledge. After painting a picture of daily domestic tasks like gardening and baking bread in “Starts,” Andy concludes, “We live between the good and the bad dream,” giving voice to the ways in which the signifiers of domestic stability can, themselves, be illusions or fantasies.

At times, Release the Dogs brings to mind the homespun world-building of Phil Elverum’s early-’00s work as The Microphones. At times, it brings to mind the deliberate introspection of Arthur Russell. It’s a cliché to say that a record “defies comparison,” but it fits here; not because of any self-styled aesthetic obtusity, but rather because Release the Dogs invites you into such an intimate and singular space that you can’t imagine it being anything, anywhere, or anyone else. Even as he constructs ever more complicated musical worlds, and even as he fills those worlds with big, complicated questions, Andy is still somehow making it all seem natural and effortless