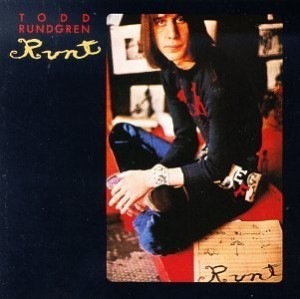 Reluctant to start a full-fledged solo career after leaving the Nazz, Todd Rundgren formed Runt, a band that was a front for what was in effect a solo project. Such isolationism lends Runt its unique atmosphere -- it is the insular work of a fiercely talented artist finally given the opportunity to pursue his off-kilter musical vision.

From the moment the slow, bluesy psychedelic grind of "Broke Down and Busted" starts the album, it's apparent that Rundgren could never have made Runt with the Nazz -- and that's before the introspective ballads or the willfully strange stuff kicks in. Throughout the record, Rundgren reveals himself as a gifted synthesist, blending all manners of musical styles and quirks into a distinctive signature sound. He's as interested in sound as he is in song and while he would later pursue these tendencies to extremes, Runt finds him learning how to create an effective sound with the studio, which may be the reason why the album runs the gamut from hard rockers like "Who's That Man?" to ballads like "Once Burned."

Although these songs are instantly appealing, the album really gets interesting when he reaches between those two extremes, whether it's in the classic pop medley "Baby Let's Swing," the bizarrely tongue-in-cheek "I'm in the Clique," or the equally impish "We Gotta Get You a Woman," which gave Rundgren his first hit. All the details buried within these songs -- not only in the deceptively direct productions, but within the writing itself -- confirm Rundgren's exceptional skill at songcraft. He occasionally slips on Runt, delivering tracks that rely on production instead of a blend of studiocraft and songcraft, but it remains a thoroughly impressive debut and one of his finest pop records--All Music