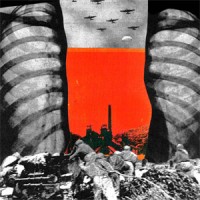 Madding crowds may have found their bounce to the beat of ‘Bad Blood’s post-punk groove but Working Men’s Club will defy all expectation with their eagerly anticipated follow-up. Forcing backs off the wall and deeper onto the dancefloor, electric stomper ‘Teeth’ possesses enough bite to set pearly whites on edge and induce a wildly ecstatic feeling that’s anything but comfortable.

“It is a metaphor,” teases the band’s singer, guitarist and beat-maker, Sydney Minsky-Sargeant. “It could be about going insane or what you see, what you think you feel inside, a lot of things… put through a drum machine… basically we just want to confuse the fuck out of people, in a good way!”

For Syd, alongside fellow Club members Giulia Bonometti, Jake Bogacki, and recently recruited bassist Liam Ogburn, the last 12 months has seen the 4-piece buckle up for a meteoric rise that’s been a hell of a ride; “Signing to Heavenly was a big deal for us,” offers Jake. “We’ve worshiped the label and its bands for a long time so it’s nice to be part of the family. It’s a culture; we’re all running in parallel.”

Like hopping aboard Willy Wonka’s psychedelic boat trip through their own funked-up factory, ‘Teeth’ puts the ‘itch’ into glitch and urges everyone to embrace the rave. Recorded with producer Ross Orton (The Fall, Roots Manuva, M.I.A, Arctic Monkeys) at his Sheffield recording studio, between a brothel and Fat White Family’s base, the vibrations of ‘Teeth’s chatter cut like fork lightning across a fog-filled Hope Valley. As the needle hits the groove, its threatening cowbell and motoric Techno beat buzzsaws Syd’s Mark E mantra, “I see grit in your teeth,” whilst a drum machine and frenetic guitars reinforce the party vibe. “We’re definitely a dance band,” Syd affirms. “If you can make someone move that’s a big thing.” Jake agrees; “When you can convince a person to subconsciously dance without understanding why, it’s a religious feeling and taps into this primal instinct.”

Shapeshifting through the band’s collaborative writing process, ‘Teeth’ offers an epic fusion of the band’s broad repertoire of influences from godfathers of early Techno, Stingray to Thelonious Monk’s jazzy piano riffs - not to mention LCD Soundsystem or Delta 5 bounce. “It works because there’s a conflict of what we each want from it,” Jake tells. “It’s like tectonic plates and that friction causes an earthquake. When we meet in the middle, ‘Teeth’ is what comes out.” Reworked from Syd’s electronic-heavy demo, laid-down at his Todmorden home through synthesizers and drum machine, the track’s climactic shakedown ignites a love of Detroit House, Acid House, Afrobeat and Cuban rhythms from his DJ beginnings and stepdad’s influence. “I’ve always been into Nigerian 70s funk, like William Onyeabor,” Syd tells. “It’s happy, jolly, danceable; I don’t think my own lyrics are that happy - but it’s not just about that. It’s about how great music can make people dance.”

Capturing moments to write, whether walking through woods, splitting crisp packets open at the local pubs around their northern hometowns or between chapters of reading Hunter S. Thompson and Sylvia Plath, Working Men’s Club put the groove first, unafraid to rear the wise heads on their younger shoulders. "We’re brought together by the fact we care about being 100% ourselves,” reveals Giulia. “We sing and talk about what needs to be said, to put it out of our minds and bodies. Music is an outlet, a medium to communicate.” Aspiring to the lyrical greats John Cooper Clarke, Lou Reed, Ian Curtis, Glen Campbell and Townes Van Zandt, the band first bonded over back catalogues rather than passing trends. “You should never deny your influences; you do things your own way,” suggests Syd. As for politics? “Bands like Squid, Black Midi, us, Orielles; we’re taken seriously, but aren’t politically adverse for sake of it,” Jake says. “Essentially, the country’s fucked and not enough of us are talking about it. That doesn’t necessarily mean we’re a political band, but we’re not gonna, not talk about it.”