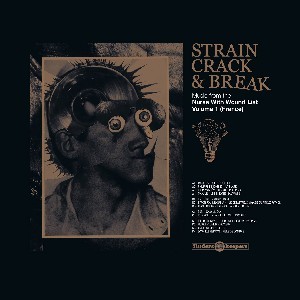 Forty years after Nurse With Wound’s first record, Finders Keepers Records, in close collaboration with Steve Stapleton remind fans of THIS kind of “lost” music, that there once existed a feint path which was worn away decades before major label pop property developers built over this psychedelic underground. As long-running fans and liberators of some of the same records, arriving at the same axis from different-but-the-same planets, Finders Keepers and Nurse WIth Wound finally sing from the same hymn sheet resulting in a collaborative attempt to officially, authentically and legally compile the best tracks from the list, succeeding where many overzealous nerds have deferred (or simply, got the wrong end of the stick)

Naturally our lavish metallic gatefold double vinyl compendium would only scratch the surface of this DIY dossier of elongated punkprog peculiarities hence out decision to release volume one in a series which, in accordance with Steve’s wishes, focusses exclusively on individual tracks of French origin, the country that unsurprisingly hosted the highest content of bands on the list.

Comprising of musique concrète, free jazz, Rock In Opposition, Zeuhl School space rock, macabre ballet music, lo-fi sci-fi, and classic horror literature inspired prog, this first volume of the series entitled Strain Crack And Break throws us in at the deep end, where the Seine meets the in-sane, introducing the space cadets that found Mars in Marseilles. Like the Swedish flat-pack record shelves that attempt to house the vast amounts of vintage vinyl that goes into a multi-volume compilation like this, its time to prepare your own musical penchants and preconceived ideas about DIY music and hear them slowly strain, crack and break.

Patrick says: Saving the younger generation (I think I still count) a lot of hard work and even more pennies, Finders Keepers begin the mammoth task of distilling the famed NWW list into a series of compilations. Volume 1 focuses on all things français, be it musique concrète, space rock, prog or free jazz.