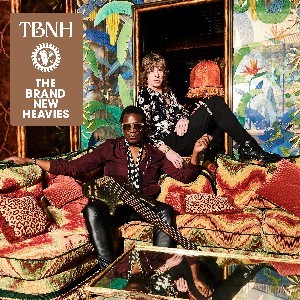 Can it really be thirty years since The Brand New Heavies first sashayed into the public eye with a romantic’s heart, a hedonist’s spirit and a Superfly sensibility?

A heady cocktail of Chic-style funk-pop, sunshine grooves and scorched soul balladry, the release of TBNH sees The Brand New Heavies writing a new chapter in what has been an illustrious journey whilst also marking a return to their spiritual home, Acid Jazz Records.

Today The Brand New Heavies share a breath-taking version of Kendrick Lamar’s These Walls recorded with long-time associate and vocalist N’Dea Davenport and produced by uber-fan Mark Ronson. It was that line-up of the band that had originally brought the funk into his life having caught their show in New York in 1991, later inviting them to play at his 40th birthday party. Insistent once more to reconvene that line-up, successfully reunitingN’Dea and The Heavies for his production of this trackfor their 30th anniversary album.

The album’s heart, both musically and physically is a friendship that can be traced back to the mid-Eighties - more specifically the shared experiences growing into adulthood on the western reaches of London for Simon Bartholomew (guitar) and Andrew Levy (bass) and a return to the formula that saw the band score sixteen Top 40 hits and three million album sales.

Millie says: Thirty years on and they’ve still got it! The Brand New Heavies are back home on their label Acid Jazz Records showcasing their soul-drenched grooves, including a Kendrick Lamar cover with Mark Ronson pulling the production strings, make sure you don’t miss this one!