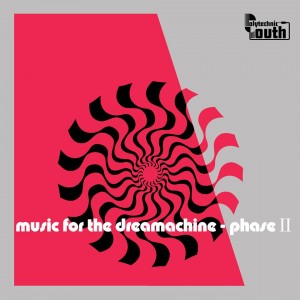 PY label head, Dom initially released Phase One of this killer drone dream / psych collaboration, on his Earworm label in 2000. It was always at the back of both his and Sunray’s Jon Chambers’ minds’ that the unreleased Phase II (not to mention Sonic Boom’s unreleased remix here) would see the light of day somehow; and lo-and-behold, here it is kids; a whole 19 years later!

Although, never one to shirk the opportunity of releasing a musical curveball of types; it could be argued that this one strays from “usual” PY territory; the darker nature of ‘Phase II’ with its’ edgy, pulsing electronics and heavily treated guitar effects pull this closer to Throbbing Gristle, Conrad Schnitzler and Heldon territory (all PY heroes!) than the original version; so perhaps on closer examination this comes as no major surprise. Sonic Boom’s purely electronic remix on the flip expands on this theme and is suitably meditational, hypnotic and intoxicating, and is an absolute must for Spacemen and Spectrum aficionados.

In Jon’s own words: “The version released in 2000 through Earworm (‘Phase One’) is really the definitive version as far as I am concerned. The original version was influenced by the sound experiments carried out by bands like Kraftwerk, Suicide and Spacemen 3 and I was keen to work with a sympathetic producer/remixer. Sonic Boom seemed the obvious choice so I approached him and he agreed. Sonic said he thought the track sounded like something off Suicide’s second LP.

All the tracks were recorded at Great Central Studios in Rugby over two days using some nice old analogue equipment including a Fenix modular voltage synth, EMS Synthi, Korg Electribe and a modified Speak & Spell from Texas Instruments which provided the weird ‘click’ on the record. Initially, we did three mixes, the first (Phase One) is the Earworm 12" and CD EP- I might get round to releasing Phase II and the second Sonic Boom mix soon”

Wait no longer, both versions are just great and appear as a 300 copy pressing on SILVER wax in a Nick Taylor sleeve that tips it’s hat to (as eagle eyed library record obsessives may spot) the ‘Audio Obstacle course – era III’ sleeve from ’73…