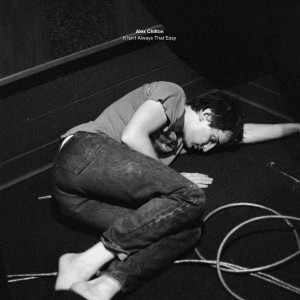 "We adore Big Star and Alex Chilton more than words can express. Being able to present two of Alex’s staggeringly beautiful demos on vinyl for the first time (on a cute picture sleeve 7", no less) is an absolute honour for us at Be With.

“It Isn’t Always That Easy” and “If You Would Marry Me” both sound like templates for some of Alex’s best-known Big Star numbers. These demos come from the transitional recording sessions he made with Terry Manning at the Ardent studio in 1969, but were missing from the vinyl version of the wonderful Free Again compilation that was released in 2012.

Caught between the end of the Box Tops and the birth of Big Star Alex’s song-craft was already remarkable - as these demos prove - and this release represents a fascinating, exploratory period in the career of one of pop’s most enigmatic talents.

“It Isn’t Always That Easy” is the real knockout. A tender, acoustic ballad that, stylistically, could have appeared Big Star’s “#1 Record”. Yes, it really is that good. A deeply affecting, ruminative lament that explores the ravages of Alex’s short career to date, it is also one of the sweetest and most delicate melodies he ever wrote. A song this stunning shouldn’t just be kept for the Big Star completists.

Over on the flip, “If You Would Marry Me” finds Alex in earnestly romantic mode. It’s just him and a piano, albeit one that is played in a poppy, uplifting fashion to complement the optimistic mood: “I could make you feel so glad inside and so alive” he confidently declares. It’s quite the gem. It really should be mandatory for this to be played at every wedding.

Unfortunately there seem to be no photographs of Alex from around the time he was making these recordings. But luckily we were put in touch with Pat Rainer who was photographing the Memphis music scene that Alex was still part of a few years later.

Happy to be described as “a friend with a camera who was hanging around”, Pat’s candid pictures of Alex included one of him asleep on the floor of the Ardent studio. Even though the photograph was taken 9 years after the demos were recorded, we think this intimate portrait makes a fitting cover for these equally intimate songs."