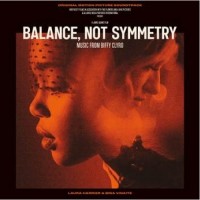 The 17-song ‘Balance, Not Symmetry’ explodes into life with the title track, which tightly packages Biffy’s angular rhythms with the kind of sky-bound hook that they’ve established as a hallmark of their sound. The track is accompanied by an official video. Also directed by Adams, it intercuts the band’s visceral live performance with footage from the film.

While the collection often explores Biffy’s gift for arena-filling anthems on the likes of ‘All Singing and All Dancing’, ‘Tunnel and Trees’ and ‘Touch’, the album as a whole leans towards introspection and experimentation. The foreboding yet elegiac ‘Gates Of Heaven’ is quite unlike anything that the band have recorded before, ‘Colour Wheel’ switches to a more ethereal ambience and ‘Touch’ echoes the emotional power of previous Biffy classics such as ‘Many Of Horror’ and ‘Re-arrange’.

The album also includes three mood-setting instrumentals (‘Pink’, ‘Navy Blue’ and ‘Yellow’) plus a studio recording of ‘Different Kind of Love’, which originally featured on last year’s ‘MTV Unplugged’ album. It was co-produced by Adam Noble and Biffy Clyro, and recorded at AIR Studios, Monnow Valley Studio and ICP Studios.

Filmed in Scotland during Autumn, the ‘Balance, Not Symmetry’ film follows American student Caitlin (Laura Harrier) after her father’s funeral, leaving her grieving mother (Kate Dickie) behind to return to her third-year studies at the Glasgow School of Art. There she juggles her grief and end-of-year presentation with meeting a new guy, Rory (Scott Miller), and a rupture in her relationship with her housemate and BFF Hannah (Bria Vinaite). Can she again find balance in her turbulent life?

SpoonEverything Hits At Once: The Best Of Spoon