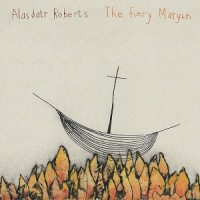 “Every song that’s nevermore sung/will sound again upon the Evernew Tongue”. Whether we understand the reference in the line, it sums up Alasdair Roberts’ approach as a singer and songwriter, now halfway through its third decade. Down the years, he has devoted himself to the history of traditional songs, playing them forward into our ever-evolving world as their meanings continue to evolve within him. Whether singing the auld songs, using inspiration from a line of text, or taking a time-honoured air as a starting point to a new song, he has pushed the tradition ahead in ways that few other singers and writers have approached.

Since his first two solo releases, a collection of traditional songs followed by one of original material, Alasdair has followed this pattern more or less over the course of a dozen albums. The Fiery Margin follows 2018’s What News, a collaboration with David McGuinness and Amble Skuse that took eight Scots ballads and focused them through the use of vintage keyboards and modern electronic techniques to make something new that was also in the tradition. Thus, The Fiery Margin is a new collection of originals, some of which draw elements from the songs, singing and thought of the last couple millennia. With that scope in mind, it’s safe to say there’s something for everyone here!

Alasdair’s impulse to communicate nuanced historical arcana in his music is matched with an ability to do so compactly in song, turning, say, a 1000-year-old Irish text on the mysteries of creation and apocalypse, or the peregrinatory journal of a mediaeval English mystic, into something with which we can all sing along. He’s been doing it long enough and with enough other fine players and singers to intuit what a set of songs might benefit from. On The Fiery Margin, he taps the percussive elan of Alex Neilson and the expansive bass playing of Stevie Jones, who have paired together with him on a couple of previous albums. On their previous encounter, Pangs, Alasdair focused on electric guitar, which gave the music a lean and wild quality that drew comparisons to the British folk scene of the classic rock era. The Fiery Margin has a diverse sound design, moving fluidly from acoustic to electric guitars while adding the nimble playing of Irish violist Ailbhe nic Oireachtaigh to embody and expand the parameters of the material. Additional players bring touches of accordion, pedal steel guitar, saxophone and barbershop vocals (!), aiding Alasdair’s process of excavating the enduringly mysterious roots of our shared music at a consonant, yet still enigmatic depth.

Recorded by Luigi Pasquini at Anchor Lane Studios in Glasgow, The Fiery Margin has the distinction of being an exceptional recital whose origins could be ascribed to traditional Scottish, Irish and English music, not to mention the sounds of the world beyond. Alasdair Roberts is an underrated talent – one that we imagine will sound even better in the gifted ears of generations to come. As for you, dear citizen of today’s world – don’t wait!

Barry says: Rich and enchanting acoustic pieces here, boldened by Roberts' acrobatic vocals and ability for sketching a scene. Obviously influenced by the psych-folk movement, but unafraid to branch into other areas, 'The Fiery Margin' is a wonderfully emotive and fascinating narrative treasure.