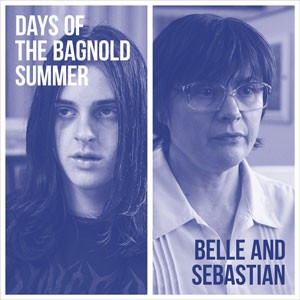 Days of the Bagnold Summer began life as a 2012 award-winning graphic novel by Joff Winterhart, was turned into a feature film and the directorial debut of Simon Bird (The Inbetweeners, Friday Night Dinner), and is now a wonderful, rich, bittersweet, and warmly welcoming original soundtrack album by Belle and Sebastian on Matador Records.

The album features eleven brand new Belle and Sebastian songs, as well as re-recorded versions of classics 'Get Me Away From Here I'm Dying', originally appearing on 1996's If You’re Feeling Sinister, and ‘I Know Where The Summer Goes’, from 1998's This Is Just a Modern Rock Song EP.

Barry says: Whether they're writing stand-alone albums, performing live or soundtracking, Belle And Sebastian have a pedigree that can't be denied. 'Days Of The Bagnold Summer' is in the latter camp, but works perfectly as a standalone album too, showcasing exactly why they're one of the most beloved bands on the indie circuit and have been for a great many years.

Sister Buddha (Intro)
I Know Where The Summer Goes
Did The Day Go Just Like You Wanted?
Jill Pole
I'll Keep It Inside
Safety Valve
The Colour's Gonna Run
Another Day, Another Night
Get Me Away From Here I'm Dying
Wait And See What The Day Holds
Sister Buddha
This Letter
We Were Never Glorious