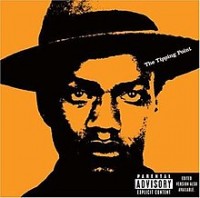 "The Tipping Point" is the sixth studio album by hip hop band The Roots, following-up the phenomenal "Phrenology" with a concept album, the concept being to record an LP while they were on tour! Released on July 13, 2004 on Geffen Records, it is named after Malcolm Gladwell’s book of the same name (2000), Featuring rough-and-ready joints like "Duck Down!" and the single "Don't Say Nuthin'", warmer soul-induced songs like "Guns Are Drawn" and "Somebody's Gotta Do It" (with Jean Grae) plus a mad cover of George Kranz's bonkers disco cut "Din Da Da"! Plus, there's a secret, uncredited cover of the Booker T breakbeat fave "Melting Pot", which is a real bonus. "The Tipping Point" has been noted by music writers for exhibiting and emphasizing soul, jazz, and funk influences as well.