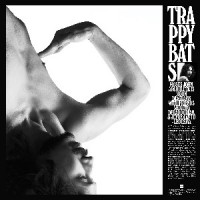 Moon Diagrams is the solo recording project of Deerhunter co-founder and drummer Moses John Archuleta. Two years after his acclaimed debut album Lifetime Of Love, Archuleta returns with Trappy Bats, a mini-LP that interweaves three brilliant new Moon Diagrams tracks with radiant reworks from Shigeto, Angel Deradoorian and Jefre Cantu-Ledesma. Trappy Bats was largely recorded in a single night as a means to process the intense intersection of Archuleta’s social, political and personal hysteria. Having been arrested for an unremembered missed court date, Archuleta spent 24 hours in a holding cell, offering ample time to reflect on his life, the current state of the nation (the jail televisions were showing a constant feed of the then-active Unite the Right rally in Charlottesville) and the other inmates. Upon being released the next day, Archuleta found himself suffering from a bout of insomnia and feeling the need to process everything through music.

Here, Archuleta is in his freest and most grateful state, channelling the turmoil and confusion he was experiencing into an unencumbered fit of creativity. It’s pure, unadulterated escapism with an even more callous palette of sounds than before, clearly split between two moods. On what you might call the ‘up’ side, the title track could be the sonic spawn of Not Waving and Terrence Dixon: a snarling mix of percussive clatter and washes of orchestral tones coalesce into a pulsating groove across its almost 12-minute runtime, the underlying ’80s aesthetic making it feel like a turbo-charged Shep Pettibone remix of New Order, looped to infinity. Detroit electronica don Shigeto goes even further and implodes the track into a kaleidoscope of bone-jarring, viscerally giddy dance music. Over on the ‘down’ side, ‘Wipeout’ is a slow-motion waltz of dusty piano and clattering percussion loops that coolly stumble along with the woozy, nocturnal flare of The Caretaker or Philip Jeck. The haunted reverie ventures even deeper with a beatifically electrified ambient re-imagination by Jefre Cantu-Ledesma. Daisychain’ goes almost completely off the grid, offering up a sweetly submerged slab of constantly evolving murkiness in the vein of Demdike Stare or a dosed Andy Stott. The sweet shuffle levitates even higher with a celestial re-interpretation by sonic visionary Angel Deradoorian, formerly of the Dirty Projectors.The end result is an extended traipse through Saturday evening fever-dream techno, Sunday morning cigarette jazz-pop and every blank thought in between.