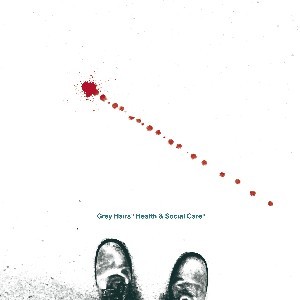 Having spent 2018 touring with Sleaford Mods, Hey Colossus and Brooklyn's SAVAK, Nottingham punk rock lifers Grey Hairs have announced their third album 'Health & Social Care' - a scorching reflection on balancing your creative impulses against the commitments of impending middle age. Their first output since 2016's 'Serious Business', released via Nottingham's esteemed Gringo Records, 'Health & Social Care' is an expansion of the band's sound that recalls elements of The Birthday Party, Laughing Hyenas, The Jesus Lizard or of a downer-fuelled B52s and what surf music sounds like coming from the most land-locked part of the country. In the video for new single 'Tory Nurse', directed by David Lilley, we're taken on a sloped and queasy trip through rural Derbyshire that sees the band tasked with delivering a body (later revealed to be a clown) to an undisclosed location. The fate of the clown is never revealed beyond disappearing into a hole in the ground, in a droll and absurd attempt to address the core ideas behind ‘Health & Social Care’ and the inevitable mystery of things to come. 2016’s 'Serious Business' saw a clear sharpening of the band’s focus.

The clue was in the title. What started as an offshoot to the members’ proper bands reached that wonderful point where it becomes an entity all of its own and steers the ship as though an invisible 5th member. And that member was steering things in directions none of the others had ever anticipated. 'Health & Social Care' expands on this. Its rage is tight and deliberate and its themes more explicitly stated. This is not a bunch of guys mimicking their youth (or other people’s youth) and balancing their weekend anti-establishment anger with their job as a software developer, or vintage furniture dealer, or credit check specialist. If 'Health & Social Care' has a theme (and again the clue is in the title) it’s “how can someone be a public sector punk in 2019?”. Commendable though most political music is, it’s perhaps easier to articulate your rage at the system when you don’t spend over 40 hours a week working in it. But what if you do? What if your punk rock ethics extend to your occupation? This is a record about balancing your creative impulses with your life as you get older and the time to do either squeezes in on you. It’s a record about aesthetic punks, Dunning-Kruger syndrome in the Health service, extreme 360 degree cognitive dissonance and – most crucially – a confusion and inability to tackle these external problems because you’re so f*cked by your own personal ones