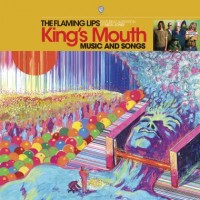 ‘King’s Mouth’ sees the iconoclastic outfit once again tread uncharted territory. These 12 new originals are threaded together by cinematic narration courtesy of The Clash’s Mick Jones. Additionally, the music parallels front man Wayne Coyne’s immersive art installation of the same name. Introduced in 2015, the installation has showcased its psychedelic visuals and soundscapes through North America in museums such as Meow Wolf in Santa Fe, NM, the American Visionary Art Museum in Baltimore, MD, the Pacific Northwest College of Art Portland, OR and Wayne’s own creative space, The Womb, in Oklahoma City, OK. A true handcrafted marvel, it consists of a giant metallic head that welcomes spectators inside. Once inside of the foam mouth, an LED lightshow begins in tandem with music from the album. Now, the record doubles as the sonic companion to the exhibit and allows fans to experience the aural side at any time.

Barry says: The Flaming Lips are always riding the peripheries of the psychedelic indie wave, and here is no different. Beautifully psychedelic moments mix with weirdo off-piste melodies and woozy saturated pads, before culminating into huge, stadium choruses. It's a heady mixture, and one that continues to make The Flaming Lips one of the most thrilling bands around. Another classic Lips outing.