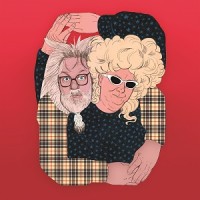 R. Stevie Moore and Gary Wilson have recorded Fake News Trending -- their first-ever collaborative album together. The historic and long-awaited collaboration is big and welcome news around the world for fans of both of these DIY/underground music legends. Although their separate and compelling stories have included sporadic intersections (both made repeated appearances in vintage Trouser Press editions, and they have also shared the bill at live shows in New York and Los Angeles), Fake News Trending is the kindred duo’s only recorded work together. While both Wilson and Moore are already touted by an illustrious roster of artists that includes Ariel Pink, Tyler the Creator, Beck, Questlove, Henry Rollins, Earl Sweatshirt, and Jello Biafra, Fake News Trendingis a crucial contribution to both artists’ bodies of work. The album not only cements their legendary status within underground circles, but will also surely reach new and appreciate fans around the globe in the months and years to come.

Although both R. Stevie Moore an Gary Wilson are each the subject of their own documentary (Cool Daddio, and You Think You Really Know Me, respectively), clearly the narrative of these two underground heroes is still evolving, and Fake News Trending will doubtless be regarded as a highlight in both of their winding, weird, and wonderful careers.