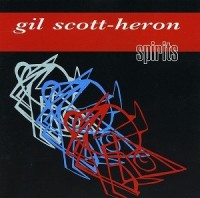 Being the hip, musically minded record shopper you are, I assume you're well aware of Gil Scott-Heron's 2010 comeback, "I'm New Here". Depensing on your vintage, you may not be as acquanited with his 1994 comeback "Spirits", which enjoys a 25th anniversary reissue here. On its release, it was the first new material from the revolutionary poet and musician for 12 years, and found Gil in fine voice and sharp mind. The title track is an interpretation of the John Coltrane piece, and "The Other Side" is a live version of Scott-Heron's 1971 track "Home is Where the Hatred Is" with a new arrangement and many new verses that expand the original to nearly twenty minutes. It was later sampled for "Home" on the 2011 Jamie XX collaboration album We're New Here.