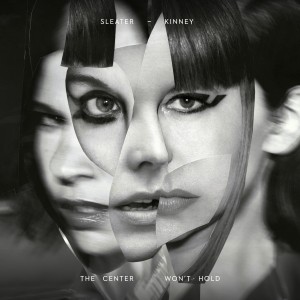 The Center Won’t Hold is the tenth studio album by Sleater-Kinney. It addresses transformation as it relates to the corrosion and decomposition of forms. Fractured and frayed by age or by loss, by internecine politics, by trauma or depression, these eleven songs ask what remains of a body, a human spirit, a relationship, a city, a country. The narrators herein sing from the brink of madness, corruption, loss, or grief. And though they speak to us from the narrow, near desperate strands to which they are consigned by others, or upon which they’ve self-exiled—feeling small, fearing obsolescence—they ask to be heard on the most sprawling of canvasses. By couching these personal stories in a sonic palette that unabashedly takes up space, what remains is a tale of survival: a treatise on female friendship, inner strength, resilience, and community.

If The Center Won’t Hold forces a reconsideration of a band people thought they knew, it’s due to the methodologies employed in the writing and making of the album. The tools upon which Sleater-Kinney had relied proved inadequate, both metaphorically and literally, so they sought new ones. They used the geographical distance between them, along with the larger uncertainty and brokenness swirling around them, as a means of inducing and exploring sonic change. Most concretely, they worked with producer Annie Clark (St. Vincent), who treated each song as its own world, letting them find a specific vernacular through careful construction and deliberation.

The most succinct thing to say about The Center Won’t Hold is that Sleater-Kinney continue to challenge the idea of what three women sound like when they create music together over the course of twenty-five years.

Barry says: Sleater-Kinney have been one of the most interesting outfits to have come out of the 90's post-grunge indie boom, and have remained a fierce musical force since then. Through a myriad of splits / reformations and stylistic turns they have returned with their beautifully crafted powerhouse, 'The Centre Won't Hold'. Huge stadium choruses and anthemic turns are infused with snapping percussion and echoing distorted guitar, all topped with those unmistakable vocals.