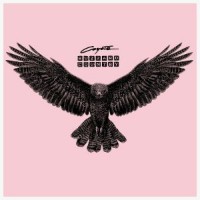 Record Label
Is It Balearic

Coyote / Buzzard Country A bird shrieks. This is Buzzard Country after all. Two wise old balearic owls rub the sandman from their peelers, and cast their gaze upon a new day. Stretching to greet the Sun, giving thanks, and remembering all those lucky years that went before. All the long journeys into night, days of altered states, and morning-afters staring out to sea. Veterans at this game, fixed on the horizon. Cosmic synths purr over a sleepy Rave baseline. Sparse, spare piano, and woodwinds pick out a path, to help you wind your way home. Around the houses, down forgotten roads. A Spanish guitar plays in the harbour, and the memory of yesterdays parties' 4 / 4 boom sparks a slow, easy Acid flashback. Echoes of 90s IDM, Intelligent Dance Music, clever beats for stoners, mixing with the faded, but not jaded, vision of an introspective White Isle sunrise. There's the spectre of a spine-tingling rush. The keys kick it off. Percussion rattling, a breakbeat shuffling, as you recall the dancers. Flamenco's shout, stamp and clap, the songs of passion, songs for heroes, while lives less ordinary screen inside your head. Movies of your own making muddling up the photo-album snapshots, and the make-believe. Tabla touches, marimba tones, and Eastern drone adorn an oasis of Dub. Conjuring a psychedelic North Africa. A mirage where Tuareg nomads cross the Sahara, accompanied by tasikisikit and prayer. Then the backing track's spinning in reverse, to score a coastal drive. Wayfarers on, as clouds caught in time-lapse charge against the blue

A1. Soaring
A2. Soft Top Saab
A3. Shimmer Dub
A4. Ranura De Marihuana
B1. Sun Culture
B2. Dos Canas
B3. Feedback Valley