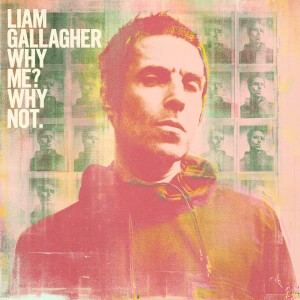 This month has seen Liam Gallagher make a typically full-throttle return. Super intimate sold-out show at Hackney Round Chapel? Biblical. Premiere and release of the long-awaited ‘As It Was’ documentary? Completed. Featured on the cover of Q, who described him as “rock’s finest frontman”? Naturally.

Liam wrote lead single ‘Shockwave’ with two of the key collaborators behind the all-conquering ‘As You Were’ album: Andrew Wyatt, who won the Academy Award for Best Original Song as co-writer of ‘Shallow’ from the film ‘A Star Is Born’, and the multiple Grammy-winner Greg Kurstin who also produced the track. It was recorded in Los Angeles.

Liam Gallagher’s debut solo album ‘As You Were’ was a critical and commercial smash. It debuted at #1, out-selling the rest of the Top 10 in the process, and was soon certified Platinum. Liam was back where he belonged, selling out huge outdoor shows and earning major awards from Q, NME and GQ.

More details regarding ‘Why Me? Why Not.’ will be revealed imminently. “It’s a better record than As You Were,” promises Liam. “Which is saying something, as that was epic, wasn’t it?”

Barry says: He's back! Liam's newest album sees him co-writing with a duo of talented musician pals, and retains all the charm and momentum of his previous outing, but with more OOMPH. Why not indeed.