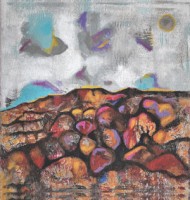 Butcher The Bar is the once bedroom pop recording project of Joel Nicholson (Joel from Vinyl Exchange to us!... - ed), now a 5 piece guitar band based in Manchester. Written and recorded between 2013 - 2015 - "III" is the first BtB album to feature a full band, originally put together to tour in 2011 following FEAFT. Recorded in studios and houses across South Manchester, this collection of songs are the most dynamic, diverse, and fully realised of any BtB release to date. It features Matt Grayson and Andrew Cheatham of Irma Vepp and Jane Weaver fame plus Gavin Clarke on bass who's previously weilded guitar for Easter and shop favourite DBH who guests on violin. An all star cast! - and it's mastered by Pete Phillipson.

Musically it's a joyfully melancholy affair, splattered with the rain soaked pavements of Manchester but looking through the drizzle with a bright outlook. There's hints of Real Estate's jangle, and although technically pre-dating Horsebeach's triptych of LPs, comparisons simply must be drawn for its naivety and charm; and it is destined to pique the interest of fellow Manchester DIY stable - Box Bedroom Rebels. If any of this appeals to you, then "III" is gonna be the perfect antidote for a rained-off Saturday afternoon of contemplation and introspection.

You can catch Butch The Bar playing at The Eagle Inn, Salford for Hey! Manchester on August 23rd...

Matt says: ice LP of softly spoken indie and rainy day lo-fi grown out of our fertile home soils. Suavely understated with tons of sentiment; one of those albums that'll get better with every listen.