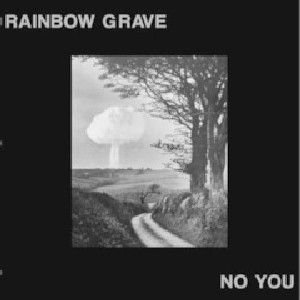 Featuring Nicholas Bullen (founder member of Napalm Death and Scorn) and John Pickering (founder member of Doom and Sore Throat), Birmingham based Rainbow Grave channel the blank despair of negative punk through layers of distorted psychedelic damage: dirty guitars, freeform pedal abuse and effected vocals coagulate around cyclic bass and drum rhythms in repetitive and minimal structures. After a performance at Fat Out Fest in Salford in April 2017, God Unknown Records approached the group to record a split 7” single. Released in July 2018 as part of Volume Three of the God Unknown Singles Series, Rainbow Grave’s ‘Death Pyramid’ is a crawling mantric blend of heavy bass, psychedelic guitars, robotic vocals and hard drums described as “deeply hewn heaviness” (Shindig) and “congruent with the great scum rock purveyors of the late 80s” (The Wire). Following the reception of the single, God Unknown invited Rainbow Grave to continue the relationship with the release of the ‘Sex Threat / You Are Nowhere’ 7” single in November 2018. This was given Single of the Week by John Doran at The Quietus. “Rainbow Grave are a Birmingham quartet whose sludge waffle sound is congruent with the great scum rock purveyors of the late 80s.