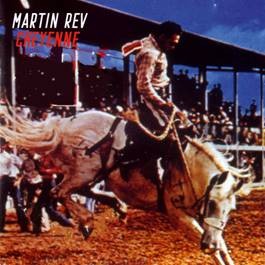 Martin Rev is best known as one half of the seminal duo Suicide (with Alan Vega). Listening to his solo albums, it becomes clear that Rev was responsible for the group’s music. Suicide mirrored the reductive and radical traits of the contemp- oraneous punk scene that was in the process of emerging, but their electronic, minimalist form of language was so unique, so innovative, that they would become a major influence on the likes of Daft Punk, Air and Aphex Twin. Alongside his work with Suicide, Martin Rev continued as a solo artist, releasing his eponymous debut album in 1980 on New York’s Infidelity label. Rev’s early solo excursions can be traced back to the original ideas which can be found – in modified form – in Suicide songs: as instrumental versions which have been texturally enriched, like a familiar figure which has nevertheless taken on a completely new existence.

Cheyenne
Although it was not released until 1991, Martin Rev’s third solo album features a wealth of material from the year 1980. For “Cheyenne”, Rev created instrumental versions of many of the tracks which had formed the basis of the second Suicide LP entitled “Alan Vega / Martin Rev”. The sphere of Martin Rev’s influence and the relevance of his music may well be related to the fact that he was one of the first artists who succeeded in grasping the abstraction of electronic music, infusing it with a sense of immediacy built on raw energy. Whilst the likes of La Monte Young, Terry Riley, Steve Reich, Philip Glass and Kraftwerk were busy digging in the electronic music garden, Martin Rev found inspiration in the streets of New York. Rev’s music is informed by characteristic influences of the city, a place where doo-wop harmonies intermingle with the hiss and hum of the metropolis, dissolving into a collage of noise. So it is that dreamy, chiming melodies blur into ominous whirrs and drones emanating from rhythm machines and layers of distorted synthesizer. This polarity between convergence and alienation describes something deeply American, as reflected in the track names and the cover image of a rodeo rider: “The idea came from the way the tracks sounded as instrumentals. They took on a different visually descriptive dimension, even more so in combination. The visualization was an immediate sound- scape of the American landscape. That’s where the titles and cover came from.” Many of the pieces found on Cheyenne can be traced back to the sessions for the second Suicide album Alan Vega / Martin Rev (1980) which was produced by Ric Ocasek, singer for The Cars. Almost a decade passed before Martin Rev got around to editing and developing the material. “Most of the album was recorded in 1980, but the remaining few tracks from 1988 into the early 90’s. The 80’s tracks all went under a concerted editing process, to make them work for me even better as instrumentals. I didn’t get around to that until there was an offer to release them, which was in the early 90’s as well.” Indeed, Cheyenne plays out like a rural, yet intense road movie, crossing a landscape rich in beauty and contradictions.