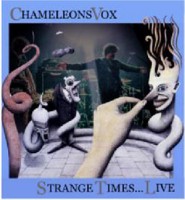 ‘Strange Times’ was the Chameleons’ third album, originally released in 1986 on the Geffen label and praised by the critics who reviewed it. Melody Maker called it “a marvellous departure” from their previous work and “a wonderful record,” describing it as “the band’s most inventive and winning album yet and as a fine a record as any guitar band has made this year - it should delight just about anyone.”

Singer and bassist Mark Burgess later said “‘Strange Times’ is my favourite. Personally, I believe it was the best lyrical work I’d done with the band and some of the best vocal performances, and I think the Chameleons really began to mature and move forward with this album.”

Noel Gallagher was quoted recently as saying “I’d forgotten how much this album meant to me. It came out in ‘86. I was 19!! I’ve been listening to it every day since and I have to say it’s blown my mind… again! It must have influenced my early years as a song writer because I can hear ME in it everywhere!!”

The Chameleons have long been named as influences on bands such as The Flaming Lips, The Killers and Smashing Pumpkins.

This recording from Preston Guildhall was taken from their current tour, which continues across the UK and Europe throughout 2019, ending at Manchester Ritz in December, supported by The Icicle Works.

The ‘Where In The World’ EP consists of four original Chameleons songs, rerecorded in 2017. As a feature of their current live set the songs were universally well-received by the fanbase and are presented here by popular request. ‘Dali’s Picture’ a discarded song written in 1981, ‘Ever After’ an unfinished demo from the ‘Strange Times’ session that produced the bands third album and ‘Denims & Curls’ and ‘Free For All’, which were demos for a fourth album that never materialized due to the band’s disintegration. Despite the years in between, all four songs feel fresh, vibrant and contemporary.

The Chameleons (known as The Chameleons UK in North America) were an English post punk band formed in Middleton, Greater Manchester in 1981. The band originally consisted of singer and bassist Mark Burgess, guitarist Reg Smithies, guitarist Dave Fielding and drummer John Lever (replacing original drummer Brian Schofield). They released six studio albums and one EP before disbanding in 2003. They have gained even bigger audiences of late, touring as ChameleonsVox and playing out their classic albums.