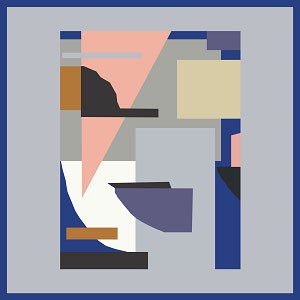 Manchester songwriter Ryan Kennedy returns with his fourth album "The Unforgiving Current". Recorded in and around Tokyo hotel rooms, apartments and studios, the album is a badly lit stroll through Tokyo's winding streets, stopping in only the most questionable bars. Despite its seemingly overpopulated centres, there is often a strange isolation. This Isolation would be the fuel behind "the Unforgiving Current".

After moving to Tokyo early 2018 Kennedy began work on the album. Amidst language and work issues his rosey outlook soon dimmed and what follows is Kennedy's exploration and loneliness in this foreign land. Previous musical similarities may be unearthed but what runs through this record is a vein of (dare I say) mature introspection which sets it apart from previous works.

Patrick says: As a man who’s only made it 14 miles in 33 years, I was suitably awestruck when Manchester’s favourite dreamer swapped the greyscale drizzle of his hometown for the 45° summer of Tokyo. Oppressive heat and impressive toilets weren’t the only cause for culture shock though, and despite an intermediate grasp of the language and a really good haircut, Ryan Kennedy quickly tasted the loneliness of a long distance runner. But it’s better to be Alone Together and the Horsebeach discography has always had a therapeutic angle; sonic salve for psychological bruising – take daily for the rest of your life.
So unpacking his mini studio and opening the notebook, the bedroom auteur embarked on his mid-career masterpiece, plunging into lyrical depths on existence, ennui, affection and introspection. His voice, still coloured with the disarming fragility of old, is more mature and confident and the music keeps getting higher and higher. Shades of psychedelia lend a paisley tint to opening volley “‘Net Café Refuge” and “The Unforgiving Current”, while “Dreaming” and “Mourning Thoughts” infuse chiming indie with baggy rhythms and Marvin Gaye grooves. Drum machines and dream pop take the lead at the midpoint, first on the lovestruck “Vanessa” and then in the coastal cool of Balearic combo “Yuuki” and “Trust”, the latter especially indulging in its own brand of louche funk. The final three tracks mark a triumphant return to the pensive jangle and C86 haze of the earliest Horsebeach work, an emphatic reminder that you have to go away before you can come home.