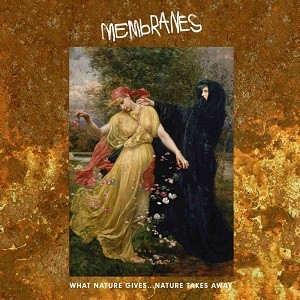 The new album from the influential UK post punk band Membranes fronted by John Robb – and their first to feature a choir, adding a dark and thrilling epic edge to their songs. Follows the success of 2015’s critically acclaimed “Dark Matter/Dark Energy” (made following their return after 20 years), which was a 6music favourite and received positive reviews across the world. The album’s environmental theme was inspired by a conversation with fellow nature and post punk fan Chris Packham (who guests on the album), about the beauty and violence of nature and the transient nature of life and love. Sixteen epic, powerful and darkly romantic songs of powerful, epic post punk with several tracks using the BIMM. Boasts adventures into krautrock, dark dub, off kilter rhythms, death disco, tribal , dark opera, neo-classical and apocalyptic bass driven noise. Featuring guests such as 84-year old folk singer legend Shirley Collins, the original punk icon Jordan and Kirk Brandon from Theatre Of Hate.

1. Deep In The Forest Where The Memories Linger
2. A Strange Perfume
3. What Nature Gives … Nature Takes Away
4. Black Is The Colour
5. A Murmuration Of Starlings On Blackpool Pier
6. A Murder Of Crows
7. The City Is An Animal (Nature Is Its Slave)
8. The 21st Century Is Killing Me
9. TheGhosts Of Winter Stalk This Land
10. Mother Ocean/Father Time
11. Winter (The Beauty And Violence Of Nature)
12. The Magical And Mystical Properties Of Flowers
13. Snow Monkey
14. Nocturnal
15. Pandora’s Box
16. Demon Seed/Demon Flower