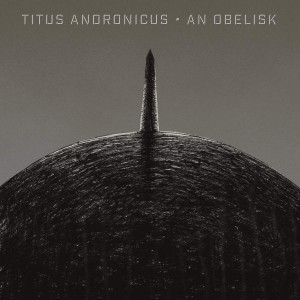 Obelisk is the sixth album from Titus Andronicus, which finds the band under stewardship of producer and legendary rocker Bob Mould (Hüsker Dü, Sugar). This trans-generational meeting of the minds has yielded the most immediate and unadorned Titus Andronicus record to date. Clocking in at 38 minutes, it is also the shortest. Recorded over six days at Steve Albini’s Electrical Audio studio in Chicago, An Obelisk presents the sound of Titus Andronicus, rock band, at its most irreducible, as monolithic as the album’s titular monument.

Titus Andronicus is led by singer-songwriter Patrick Stickles, now flanked by longtime guitarist Liam Betson and the indomitable rhythm section of R.J. Gordon on bass and Chris Wilson on drums. An Obelisk is the first record to showcase this lineup from tip to tail, each track bearing distinctive fingerprints of each musician, their particular chemistry honed through extensive touring and rigorous rehearsals. Excepting the background vocals of Ralph Darden (Ted Leo and the Pharmacists), no outside musicians were utilized, leaving ample room for the pummeling drums and slashing guitars to thrive under the notoriously economical hand of Mould. “Bob Mould is quite the role model to a guy like me,” Stickles confesses. “He has conducted his 40-year career with a remarkable level of integrity and loyalty to his own internal compass. He has often zigged when he was expected to zag, but the consistent excellence of his output has earned him the unconditional trust of his audience. What more could you want than that? What better way, for a guy like me, to learn to actualize such a vision than to get into the man’s workplace and do as he tells me to do?”

Tempting as it may be to label An Obelisk a “back to basics” effort, this is not a return to the band’s roots—this is an excavation of the dirt beneath those roots. An Obelisk also functions as a companion to A Productive Cough. Together, these records present a panoramic view of Titus Andronicus’ musical interests. An Obelisk has all the trappings of a classic punk album, though, to hear Stickles tell it, it is moreso an album about punk. “In a universe devoid of higher meaning, it is our responsibility to impose our own meaning upon it and to afford others the space to do the same. The true ‘punk’ must be constantly assessing and reassessing their own values and belief systems, lest they fall into the trap of merely pulling their identity off of the rack, in the manner of the snobs and meatheads they claim to oppose.” “The way in which an obelisk narrows as it reaches skyward reminds me of the way in which our system seems to consolidate power onto a smaller and smaller base over time,” Stickles concludes. “Whenever, wherever the sun shines, an obelisk casts a long shadow—An Obelisk is the story of one individual’s attempt to find a place for himself in that darkness.”

Barry says: Mixing the rawkous, booze-addled punk drawl of the Pogues with more modern distortion and dynamic activity was never going to be an easy task, but with legendary musician and producer Bob Mould at the helm, it was never going to be anything but exceptional. Heavy but reassuringly sludgy, 'An Obelisk' is a superb mix of all the influences that make modern punk so great. Top stuff.

Titus AndronicusThe Will To Live