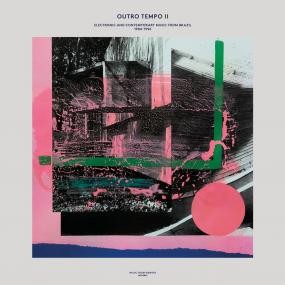 As Amsterdam's chief musicologists, Music From Memory have spent the past six years guiding us through unheard ambient, Balearic, boogie and Afro-wave, opening our minds and tickling our pleasure centres with their rare delights. After a string of flawless reissues and a fresh LP from Gaussian Curve, MFM dropped their first compilation at the start of 2017, inviting expert digger John Gómez to take stock of the bizarre bedroom pop, Amazonian electronics and offbeat MPB born out of 80s Brazil. As close to perfection as it gets, the compilation flew off our Piccadilly shelves, dominated Mancunian turntables and put a lot of smiles on a lot of faces.

Outro Tempo II: Electronic and Contemporary Music from Brazil, 1984-1996 is the second installment of Music From Memory’s Brazilian series. This volume picks up where the first Outro Tempo left off, shedding light on a new wave of experimentalism that emerged in Brazil in the late 1980s and 1990s. The twenty tracks collected uncover another area of Brazilian music that looked to the future for inspiration. This time it drifts beyond the rainforest and into the pulsating heart of Brazil’s great cities, where it meets a generation of young artists eager to radically change the face of contemporary Brazilian music. In "Outro Tempo II" the avant garde and pop worlds meld in a haze of percussion and electronics. It presents another uncompromising and magnetic reinterpretation of the limits of Brazilian music.

Patrick says: John Gómez goes back to Brazil for a second instalment of rare gems, leftfield pop and percussive tone poems. There's too many winners to mention here, but I've been after that May East track for about 3 years now, and it's worth the entry fee alone...